Chevrolet has introduced the restyled 2014 Camaro. The long debated rumors of a Z/28 model have come true. This car is going to be an all out Performance Monster. Engineers have gone over every aspect of the GEN5 and have made some significant improvements. The revised exterior has been designed to increase aerodynamics for high-speed stability and improved cooling. Increasing down force and reducing lift are achieved by the functional hood vent, large front splitter and under body panel. On the back end the rear spoiler and diffuser complete the aerodynamic package.

Although the Camaro Z/28 is not intended to compete in a specific race series the design was focused for on-track capability. In initial testing the Z/28 was three seconds faster per lap than the ZL1. The extra speed can be attributed to several areas:

The 2014 Camaro Z/28 will be offered with 6 Speed manual Tremec transmission, and air conditioning as an option. On the interior, Recaro seats are standard. They feature suede inserts, aggressive side bolsters as well as seat cutouts inspired by 5-point harnesses found in racecars. Both front seats feature manual adjustments to save weight. The steering wheel is the same flat bottom style borrowed from the ZL1. 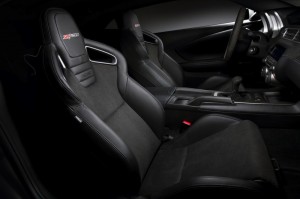 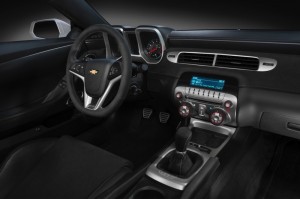 The Z/28 suspension and chassis have undergone substantial improvements in order to pull 1.05 g in cornering. The dampers feature a spool-valve that allows four-way adjustment to precisely tune both bump and rebound settings for high-speed and low-speed wheel motions. This allowed engineers to increase stiffness without a significant decrease in ride quality. Spring rates have been stiffened and bushings have been revised to improve cornering response.

Wheels and tires are all new on the Z/28. By going to a 19” wheel, unsprung weight was reduced by 42 pounds compared to the 20” wheels found on the Camaro SS. The smaller diameter wheels lower the center of gravity by 33 millimeters, further improving handling. The lightweight, forged aluminum wheels are wrapped in 305/30/ZR19 Pirelli PZero Trofeo R tires. These may be the widest tires on any production car!

One of the key components to a successful racecar is the braking system. They need to be able to control the vehicle as efficiently as possible. Excessive heat increases stopping distance and can lead to pedal fade and poor handling. The Z/28 is equipped with Brembo Carbon Ceramic Matrix™ rotors and fixed, monoblock calipers. The large 394 x 36 mm front rotors are paired with six-piston calipers, while the 390 x 32 mm rear rotors are paired four-piston calipers. These light weight brake components help to save 28 pounds.

The combination of the Pirelli Tires and Brembo Brakes enable the Z/28 to achieve 1.5 g in deceleration. Front brake cooling ducts are standard and make the Z/28 capable of continuous track use lap after lap. 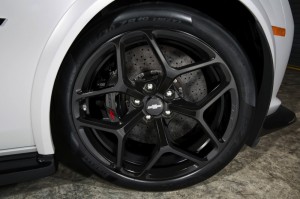 Powering the 2014 Camaro Z/28 is the mighty LS7. Co-developed with Corvette Racing, the hand-assembled engine is filled with many high-performance components. 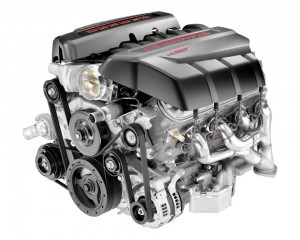 The LS7’s CNC-ported aluminum cylinder heads were designed to fill the airflow demands of the 7.0L. The heads have straight, tunnel-like intake runners providing excellent torque at low rpm and thrilling horsepower at high rpm. The combustion chambers are sized at 70cc and are fed by 56mm titanium intake valves and 41mm sodium-filled exhaust valves. The exhaust valves feature hollow stems partially filled with a special sodium material that melts and liquefies around 205° F. The inertia from the valves’ opening causes the liquefied sodium to move up inside the stem. This action dissipates heat better than a conventional exhaust valve. The LS7’s valve angles are positioned at 12°. This helps to enhance airflow through the ports to get it into the combustions quicker and with less turbulence.

All of this great cylinder head technology would not be optimized without a properly designed exhaust system. The Z/28’s exhaust system is unique and features a Tri-Y header design. This is to take advantage of the firing order. On the left bank, primary pipes join one and five together then three and seven. On the right bank two and four are joined then six and eight. At each bank, the primary cylinder pairings collect into a secondary Y. This delivers a combination of pulse separation of adjacent firing cylinders and improved scavenging for the engine’s firing order of 1-8-7-2-6-5-4-3. Following the Tri-Y headers is a dual mode, three-inch exhaust system. This low restriction exhaust system provides increased torque and sound quality.

The LS7 features a dry-sump oil system to keep the engine fully lubricated during high cornering loads. The system uses a 10.5qt reservoir that delivers oil at a constant pressure to a conventional oil pump pickup located in the bottom of the engine. The pressurized oil feed keeps the oil pickup constantly immersed in oil during extreme cornering loads ensuring the engine never loses oil pressure. 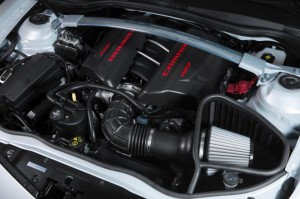 I am looking forward to the 2014 Camaro Z/28 . GM continues to improve and make every aspect of the Camaro better. These are exciting times and it’s great that we have so many choices on performance vehicles. 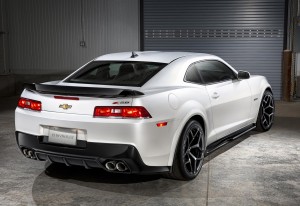 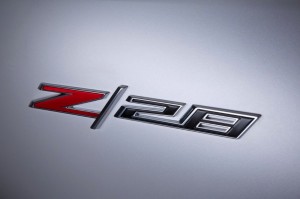 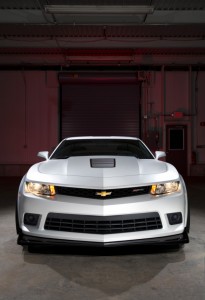