Technology and NASCAR go hand-in-hand in the future of stock car racing. In 2012, the Cup Series has switched from 4 decades of carbureted engines to fuel injection.

One of the major advantages electronic fuel injection has over a carburetor is the ability to adapt to a changing racing environment.

Because NASCAR is always making left turns not all cylinders of a V-8 engine get the same amount of fuel.  The carburetor mixes the fuel with the air in the intake manifold and directs it into the intake manifold.  When you are turning left, centrifugal force tries to take more fuel to the right-hand bank of cylinders, less to the left.

To solve this issue you have to add more fuel in order to make sure those left-hand cylinders get enough fuel. With the use of fuel injection this issue has been remedied.

Holley Performance Products has been selected by NASCAR to supply high performance throttle bodies to Sprint Cup Series teams as they transition to electronic fuel injection in 2012. Holley has a long-standing relationship with NASCAR helping assure high quality fuel delivery products have been supplied to their teams for over 40 years. Holley Carburetors have powered every professional NASCAR team since the 1960s.

Holley will manufacture the new throttle bodies in their ISO 9001:2008 certified Bowling Green, KY facility – the same facility where the majority of their NASCAR Carburetors have been manufactured. The throttle body is a critical component in the electronic fuel injection system and will be the key to regulating the airflow to the NASCAR racing engines. The Holley throttle bodies were designed using computational fluid dynamics (CFD) software to assure the airflow met NASCAR specs.

The new Holley throttle bodies are constructed of aerospace quality billet aluminum and will be machined on five-axis CNC machines to hold the demanding tolerances required in NASCAR racing. They feature 17-4 stainless steel throttle shafts, throttle levers and linkage to handle the extreme conditions found in NASCAR racing. The throttle shafts and throttle plates are profiled for maximum airflow. The throttle shafts will ride on sealed needle bearings for smooth operation and durability. The venturi has been contoured for efficient yet maximum airflow. A positive throttle stop has been built in as an added safety feature. Each throttle body will be anodized for corrosion protection and then individually serialized for NASCAR.

With the introduction of EFI to NASCAR in 2012 the season will inevitably be exciting and filled with uncertainty. But this is one of the reasons we watch. Stay tuned as the excitement unfolds. 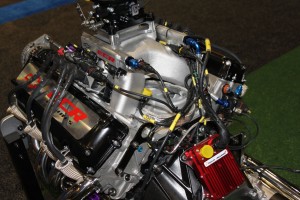 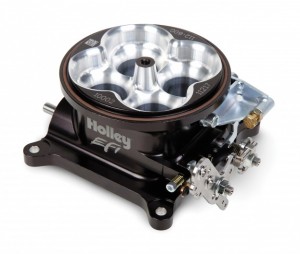