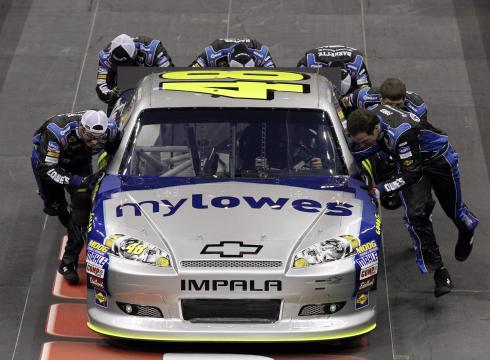 CHARLOTTE, N.C.  The number 48 team of Hendrick Motorsports saved the best for last as they inched ahead of the number 11 Toyota from Joe Gibbs Racing to win the Pit Crew Challenge.

The competition includes simultaneously changing front and rear tires, fueling and jacking four different cars, then pushing a team car across the finish line. Johnson’s crew was able to finish in 22.239 seconds to edge Hamlin’s crew (22.533 seconds) in the finals.

The victory was the first for the Hendrick Motorsports No. 48 team in the eight-year history of the event held at Time Warner Cable Arena. The team won $80,675, a $10,000 increase over last year’s prize money. In addition, the Jimmie Johnson foundation received a donation of $9,169 from the NASCAR Foundation.

Besides winning some money the team also won the right to select pit stall No. 1 for Saturday night’s Sprint All-Star Race, which pays $1 million to win.